A case study from BRAC and BIT

Written by Guest author
Updated over a week ago

Organisation: Collaborative project between BRAC, the Brac Institute of Governance and Development (BIGD) and the Behavioural Insights Team (BIT).

Population served by the programme: The project intends to reach 10 million people over the period from May 2020 to May 2021.

Unique characteristics of the setting: Bangladesh is a densely populated country but with limited medical response capabilities with only 550 ventilators and approximately 20,000 isolation beds available for a population of 164 million as of April 2020. There is widespread stigma and misinformation regarding COVID-19, which has created the need for factual, contextually-appropriate, and simple messages to be disseminated across communities.

Briefly describe the key components of your COVID-19 response programme.

Our project aims to encourage the adoption of improved handwashing practises and facemask usage, using a wide range of interventions informed by behavioural insights. Some of the key components include:

The rest of the study will focus on our learnings developing instructional handwashing posters for public handwashing stations.

What process did you use when designing your COVID-19 response programme?

We designed the instructional handwashing posters in several stages.

First, we reviewed posters that have been used by the World Health Organisation and Ministries of Health around the world, as well existing evidence from randomised controlled trials we had already run in the UK context (e.g. demonstrating that posters with bright infographics and minimal text are better able to communicate handwashing techniques).

Second, we ran a randomised controlled trial to test four potential poster designs against a no-poster control. A sample of 2,196 Bengali adults were recruited via social media. They were randomly shown the four different variants of the posters. We then tested their ability to recall and understand key messages from the posters. 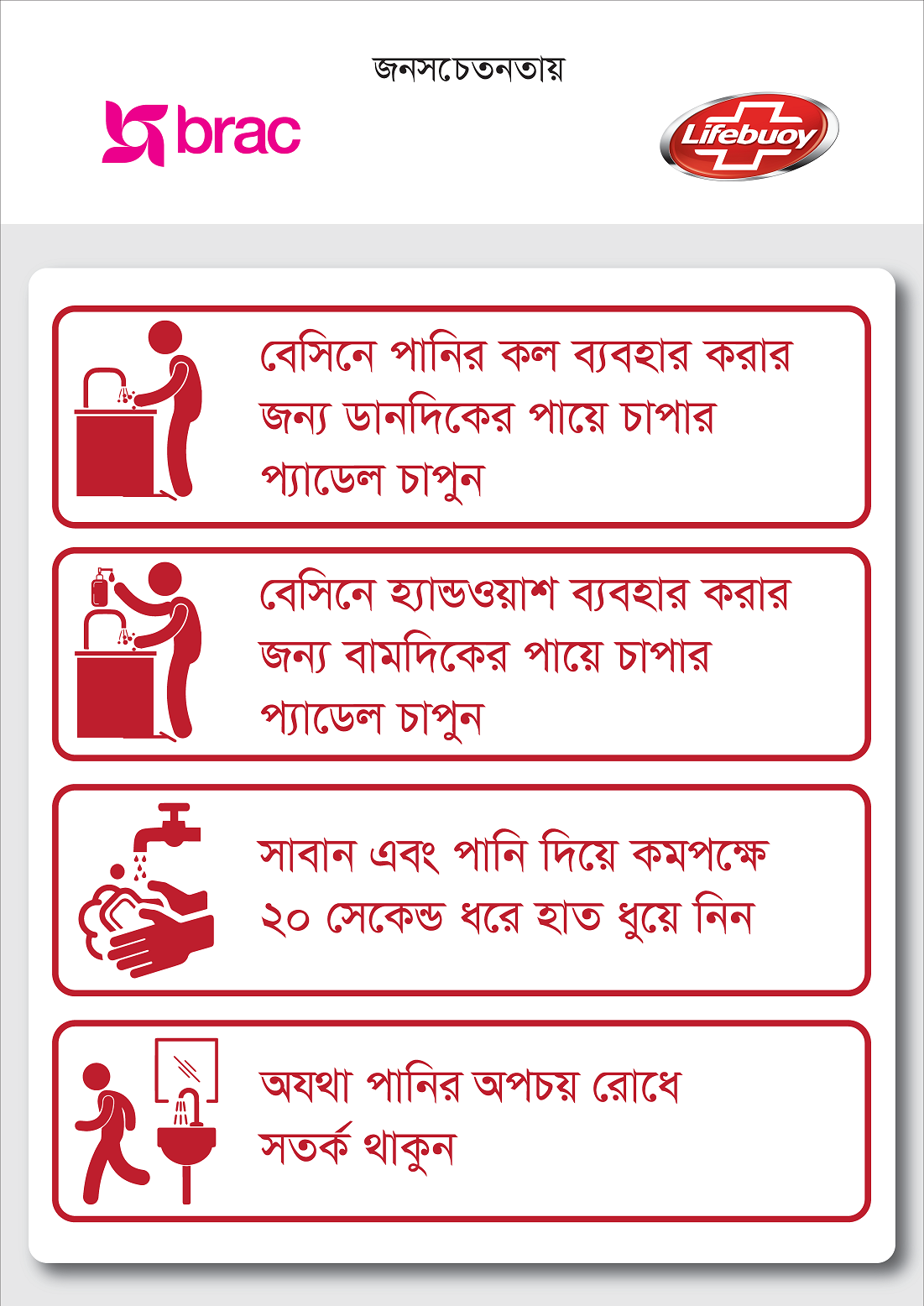 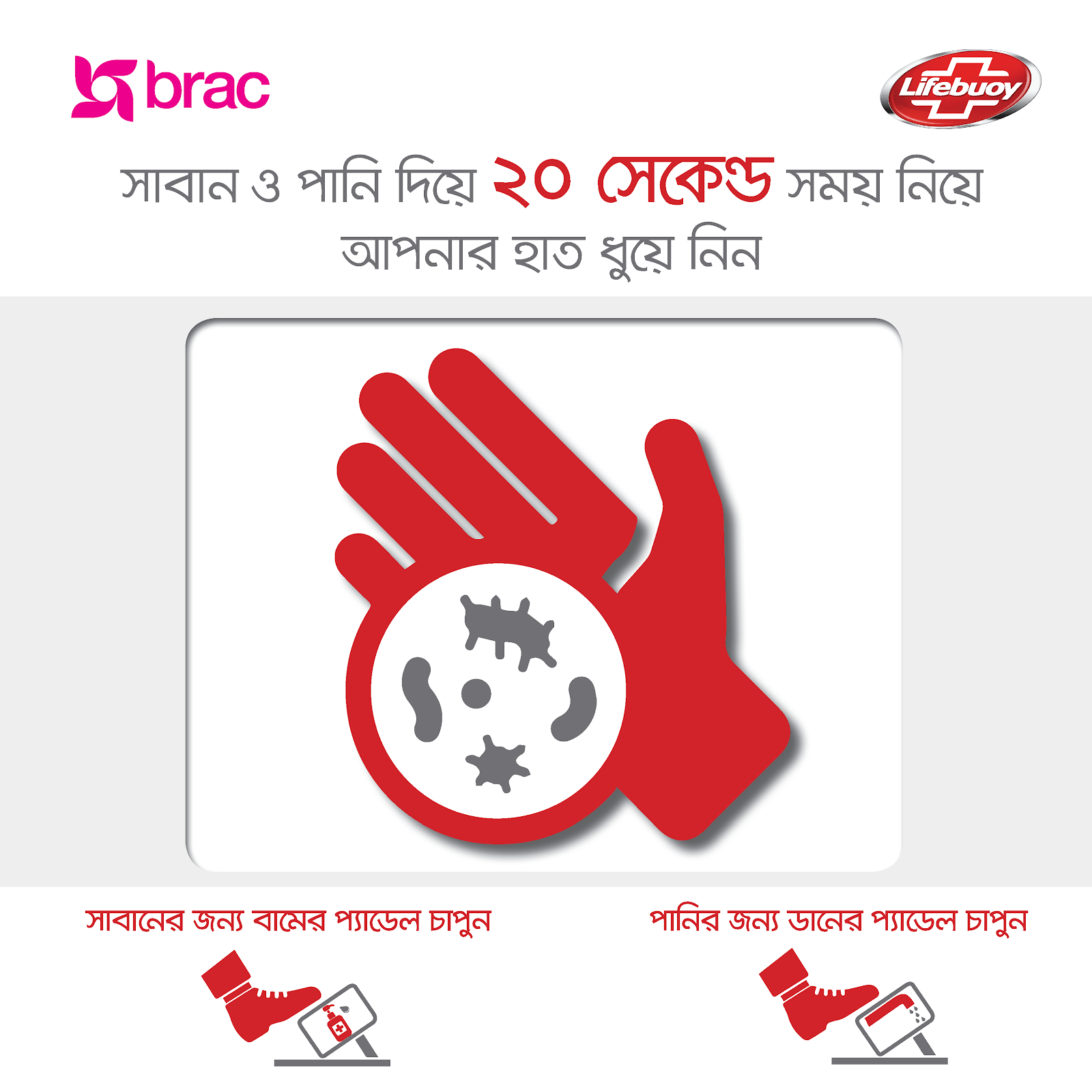 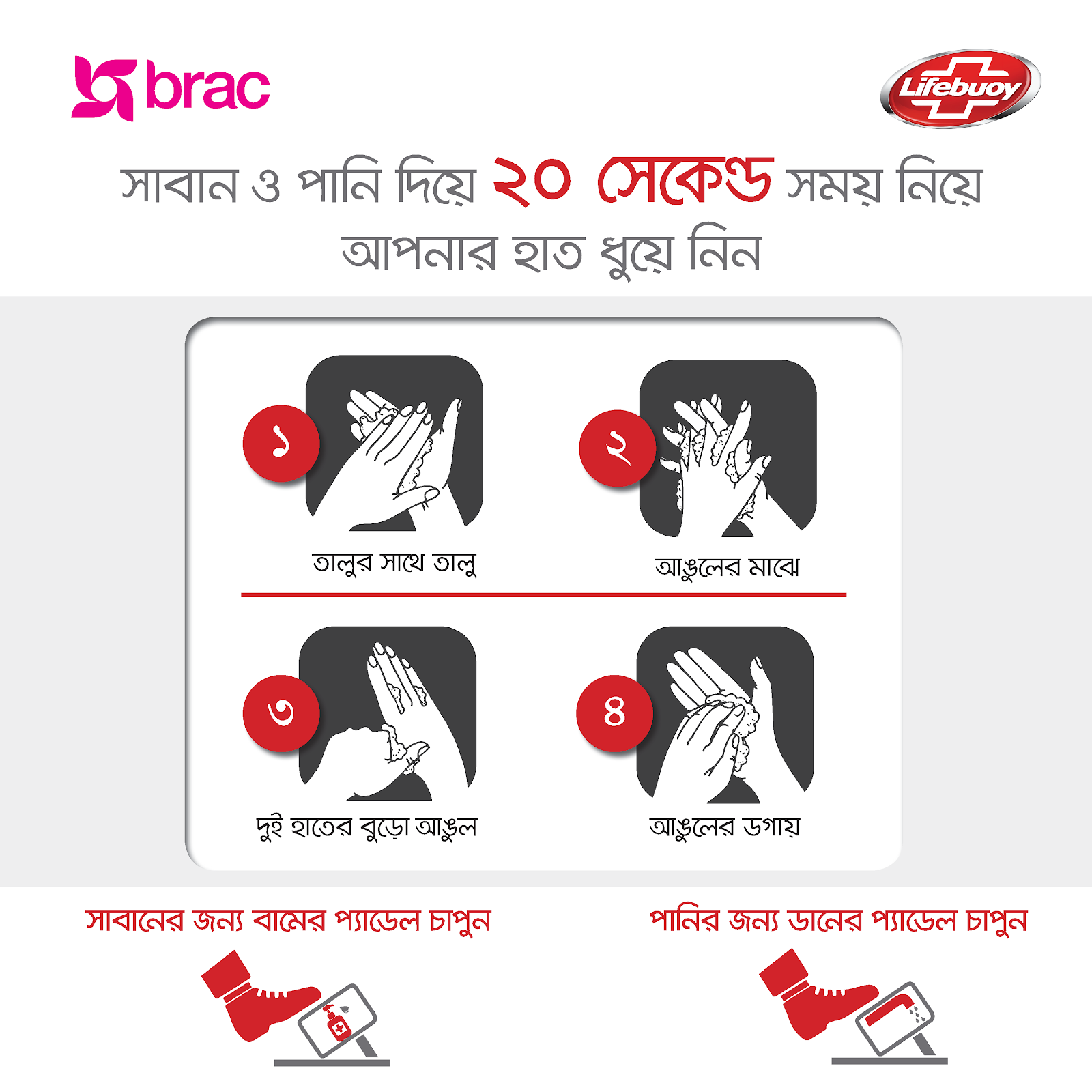 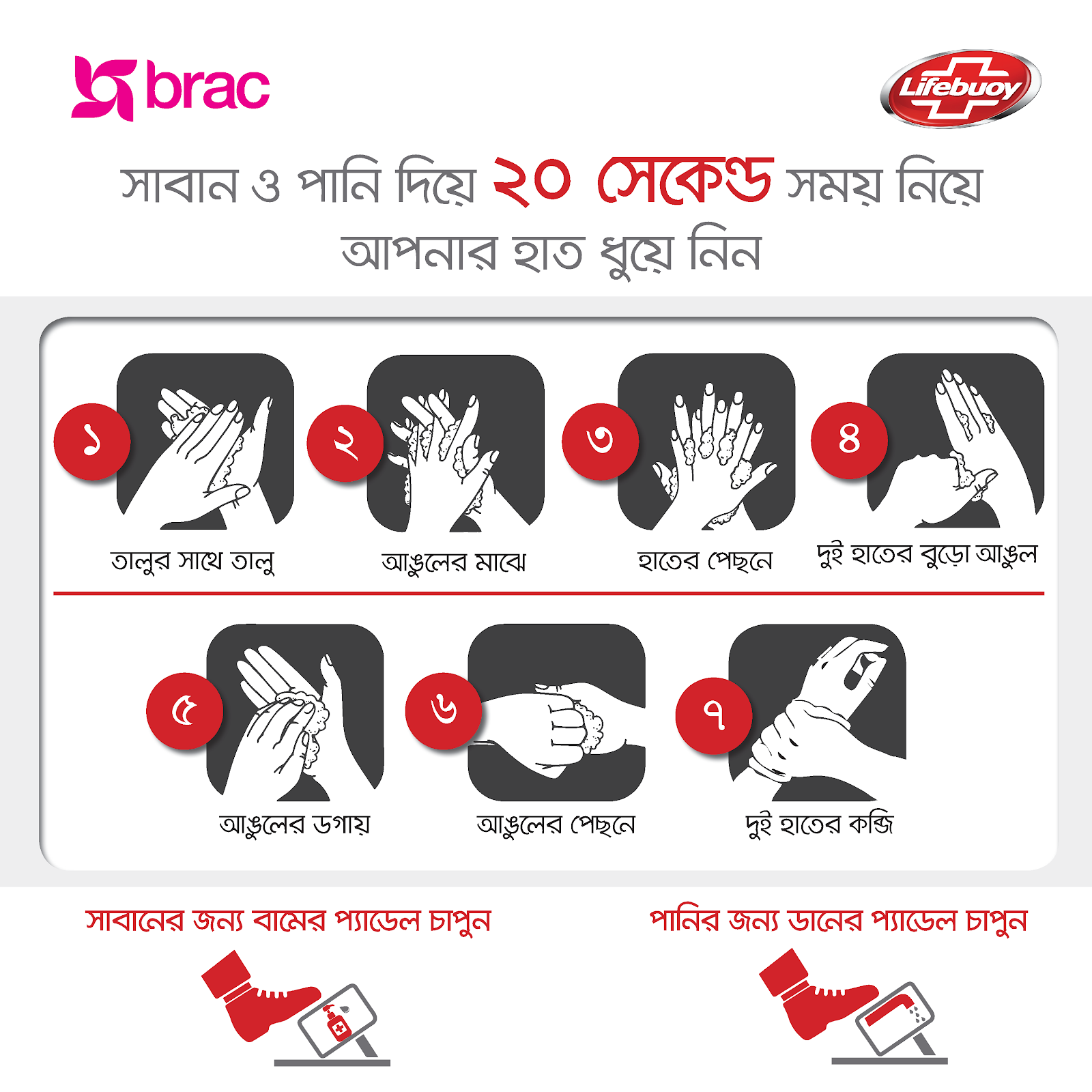 As a third stage in the process, we iterated on the design based on feedback from our field staff. We added a fifth step (washing wrists) to the four step poster, and used a more eye-catching elongated design that provides the added benefit of making the stations more salient, as shown in the image below: 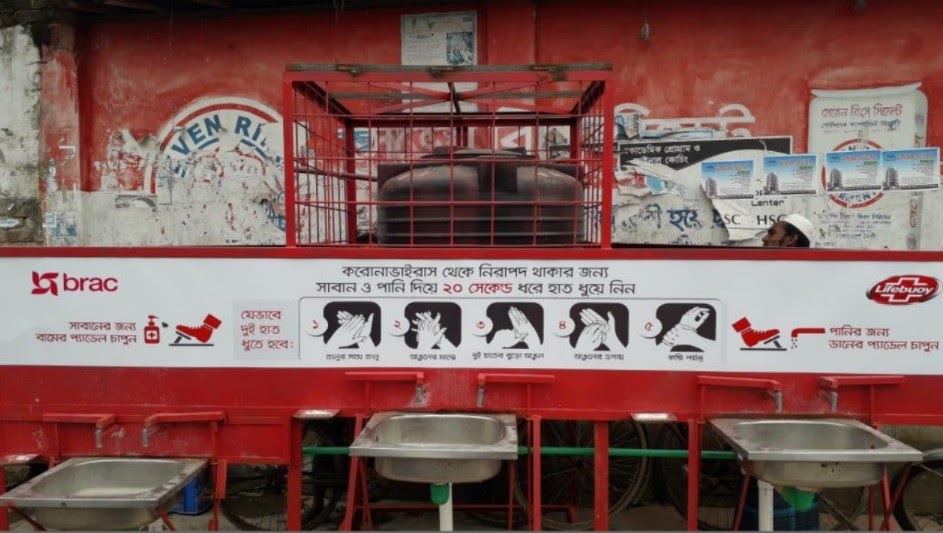 Finally, the posters were added to a set of 14 pilot handwashing stations. User feedback was gathered from several sources, including short phone surveys conducted by our field team.

We are currently in the process of creating the final design of the poster for roll out of the 1,000 stations.

What is one thing that has been working really well so far and is there something other programmes could learn from this?

When communicating about coronavirus, policymakers face a delicate balancing act - sharing enough information that people know what to do, but not so much that it becomes overwhelming. We used the handwashing posters randomised controlled trial to understand how much information is too much information.

After seeing either the 4-step or 7-step poster, people were approximately 10 percentage points more likely to recall that they need to wash their palms and wash their thumbs compared to the posters that contain only the simple messages. However, in the case of the longer 7-step poster that improvement comes at a cost. For the 7-step poster, people are 5 percentage points less likely to recall that they should wash their hands for at least 20 seconds compared to the poster with behavioural insights and a simple message. More information on the RCT can be found here. These findings show that coronavirus communications programs should carefully consider how to provide critical information on preventive behaviours without causing information overload.

More importantly, our programme shows how valuable it is to conduct rapid research to test what works, even when under tight time pressure in emergency response projects. Testing the fine details of an intervention at an early stage allows better designs to be scaled up.

What is one challenge that you have encountered and how are you trying to overcome this?

At the start of July 2020, we could not safely ask enumerators to show participants the posters in person. We were therefore forced to recruit survey participants online. This presented an important challenge. Our trial sample is a selected group of digitally literate smartphone users, which is unlikely to be representative of our target population, who are people in need for public handwashing stations.

We tried to overcome this challenge in a couple of ways. First, we carefully considered the ways that our online sample was likely to be different to our target population. One key concern was that our target population has lower literacy levels than our trial sample. This corroborates the use of step-by-step posters which contain visual images of handwashing techniques instead of written instructions only. In addition, information overload may be more of a concern for individuals with lower levels of education. This reinforces the idea of using a short 4-step guide over a longer step-by-step guide. Second, we gathered user feedback from individuals living close to the stations through short phone surveys. On the issue of literacy, we found that approximately 10% of the individuals who remembered seeing the posters reported difficulties reading the words, including the instructions on how to operate the stations. We plan to respond to this by adding colour-coded stickers by the water and soap taps on the stations, whose colours correspond to the associated foot pedals.

How have you been engaging communities throughout your programme and what feedback have you received?

We conducted a process evaluation on the 14 pilot stations in August 2020 to gather feedback from our target populations. This process evaluation intended to assess the impact of the stations overall, including the instructional handwashing posters. Together, we conducted 25 in-depth interviews, 8 focus group discussions, and over 200 short phone surveys with people living around the stations. We also contracted an independent organisation to conduct over 600 hours of structured observations of how people use the stations.

Findings from this process evaluation were very detailed, comprehensive, and overall positive. It allowed us to identify remaining barriers to handwashing at the public stations. For instance, some women reported feeling uncomfortable washing their hands in public. We found that women were less likely than men to pass by the stations, especially in rural areas, as their mobility outside home is often restricted. Participants also reported that signage in the surrounding areas to point people to the handwashing stations was easy to miss. We are planning to address these issues in the full-scale roll out, by adding and testing new interventions at the handwashing stations.