All Collections
Sustainability
FAQs: Economics of hygiene programmes
What is known about the state of national handwashing funding?

What is known about the state of national handwashing funding?

Written by Ian Ross
Updated over a week ago

Most countries report having a hygiene policy and/or plan, though these are often part of broader WASH sector strategies rather than standalone documents or plans. Of 109 countries responding to a UN survey, 79% reported having national policies for hygiene and 73% reported having a plan. However, few governments have sufficiently funded these policies. Of the 80 countries with plans, only 60% reported having calculated the costs of implementing them. Only 5% of those with a hygiene plan reported having sufficient funds to implement them, compared to 10% of countries with a plan for improving sanitation and drinking water. Furthermore, countries were less likely to have plans for hygiene than for sanitation and drinking water, and less likely to have estimated the cost of a hygiene component if they had one.

Few governments have dedicated hygiene budgets. Only 17% of the 109 countries responding to the UN survey reported their hygiene budget and/or expenditures. Furthermore, even where specific hygiene budgets exist, they are typically small. As the graph below shows, among the 18 countries reporting government hygiene expenditure, only 4% of total WASH expenditure was allocated to hygiene. The same is likely to be true of WASH programmes funded by donors and NGOs, with hygiene often being de-prioritised and proportionally less funded than water and sanitation components. According to a World Bank study, the price tag for achieving the basic hygiene target in the SDGs is indeed substantially lower than for basic sanitation or basic water. There is no guidance on the optimal balance for resources within WASH sub-sectors, and the extent to which their SDG price tags should be covered by public finance as opposed to household investments varies. At the moment there is still relatively little known about how much is being spent on hygiene and the relative impact of different types of investment. Greater transparency and monitoring of hygiene programme costs could be a major asset to the sector. 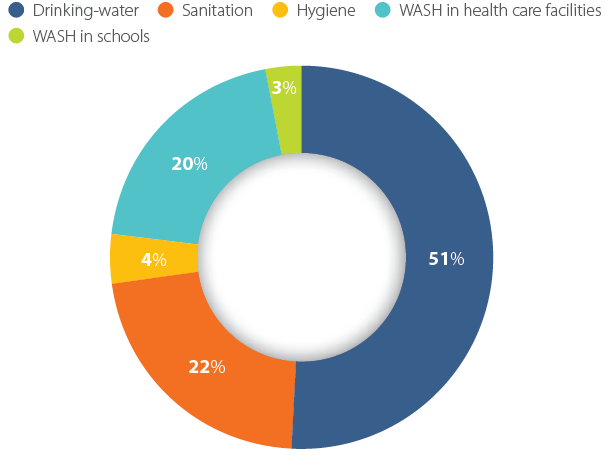 Regarding what is known about the state of national handwashing funding, two messages are to be emphasised:

Want to learn more about the economics of hygiene programmes?