How is community engagement normally done?

Written by Jen Palmer
Updated over a week ago

To ensure information about the disease and response measures are discussed widely and to enable coordinated, community-level action on a large scale, community engagement initiatives typically pay close attention to:

Community engagement tends to work best when it is done on a continuous basis, through trusted authorities and in the form of a two-way dialogue, with at least some interactions done face-to-face. Each of these topics is discussed below.

1. Mapping the stakeholders to engage

The World Health Organisation and its partners emphasise that community engagement for an outbreak should build upon existing networks and past preparedness efforts. Public health authorities should identify and map the capacities of organisations, networks and stakeholders that can facilitate adoption of public health measures by the wider public. These efforts should be made at multiple levels, from national to local districts .

Stakeholders will differ according to the context, but may include local authorities, public and private institutions, community based groups, as well as civil society organisations such as faith-based organisations, advocacy networks, volunteer groups and organisations that fill gaps in essential state services and welfare provision (such as in informal urban settlements). Gaining a realistic understanding of existing socio-cultural and political structures and relationships is essential, to ensure that the stakeholders tasked with communicating and discussing information are trusted by local and diverse community members.

See the example below for a description of how stakeholders were identified in a region of Guinea during the West African Ebola outbreak.

Community engagement processes in the ethnic Kissi community of Guinea during the West African Ebola outbreak, as described by Wilkinson et al:

In ethnic Kissi regions of Guinea in 2014, Ebola response teams encountered distrust and resistance from local populations, which was contributing to an inability to control the spread of the Ebola virus. As a result, an anthropologist was asked to join the response to help understand and allay the tensions. One of her key findings was that the ‘community leaders’ whom various response teams had liaised with were considered illegitimate. Selection had been either through self-identification to teams, or assumed from their elite professional, civic or political associations which local people associated with abusive regimes. To identify more trustworthy individuals in the community whom response teams could work with, the anthropologist spent three days asking people who they would trust and nominate to speak on their behalf. From the long list of names collected, she identified 150 which came up frequently, spanning 26 villages. The list included: traditional practitioners, heads of the sacred forests, religious leaders (Christians and Muslims), circumcisers, village birth attendants, hunters, youth, returned migrants from the city, and elders. The response team held a workshop with these 150 people to discuss the response which ultimately lessened the resistance and initiated cooperation.

At each level and phase of engagement, special thought should also be given to how best to engage parts of the population who are at particular risk of the disease or who might be difficult to reach with information and services. This is because interventions may need to be adapted to meet different needs, capacities and levels of vulnerability of different stakeholder groups.

Guidance for ensuring community engagement is inclusive of marginalised and vulnerable people, with examples of specific actions that can be taken, is available from the Regional Risk Communication and Community Engagement Working Group.

During outbreaks, public health authorities prioritise sharing informative, life-saving and actionable information in real-time to enable stakeholders to design effective control strategies and to enable people at risk of disease to adopt protective health behaviours. Authorities also need to recognise how the quality of information they provide and the style through which public health messages are communicated can motivate or alienate stakeholders and the public and affect public health behaviours.

Behaviour change specialists have explained that this is because of the role information plays in promoting trust:

“people will cooperate to achieve common goals if they feel like they are part of a shared communal effort, and if they believe the people leading this effort are part of the same ‘community of circumstance’ and are acting legitimately on their behalf [...] If people feel that they are not given enough information to allow them to undertake these difficult actions, or that their agency, choice, or control over their lives is undermined, then their sense of cohesion with the leaders and organisations providing guidance will be compromised. As a result, public health directives are more likely to be resented and inadequately applied or even ignored.”

In the table below, they recommend key communication strategies that can enhance community engagement. This includes transparency, continuous interaction, practicality and respect for difference: 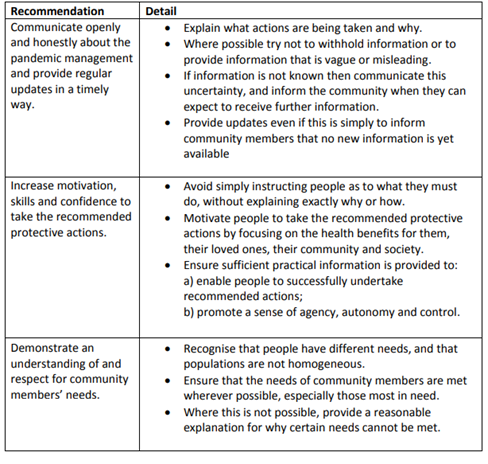 Though advice needs to be tailored for different contexts, the principles of communicating about disease control should be consistent and coordinated. People have a greater level of trust in consistent information which they see featured in multiple sources or channels, whatever these may be. However, the same is true of mis-information which can gain traction and credibility as it circulates. For information on identifying and addressing false information, see these resources by the Social Science in Humanitarian Action Platform and the CDAC Network.

Care should also be taken to ensure information is communicated in the languages preferred by different parts of the population.

An effective way to ensure that information is responsive to people’s needs and concerns is by listening to and collecting feedback on the information that is disseminated so that it can be tailored to meet community needs which may change over time.

Further guidance on how to communicate messages about COVID-19 is available here and here.

To be effective, we know that community action and behaviour change programmes need to interact with populations on multiple occasions, over an extended period of time. This is because populations have a range of other priorities and may only be motivated to act after hearing messages numerous times and through a range of sources. Read more about the principles of behaviour change here. Public health authorities also need to reach multiple parts of a population. For all of these reasons, public health campaigns tend to adopt multiple channels of communication.

In the public health response to Ebola in the Democratic Republic of Congo (DRC) in 2018, community engagement happened through the following channels:

When selecting delivery channels for community engagement, consider the following:

Remember that in many locations, information about appropriate delivery channels already exists. Make sure to utilise these existing resources. Here is an example of a document mapping delivery channel preferences in Lebanon.

Want to know more about COVID-19 and community engagement?