What should be considered when choosing sample populations for remote data collection?

Written by James B. Tidwell
Updated over a week ago

There are four main options for identifying potential sample populations shown in the table below. These are based on two main considerations:

A brief description of each of these four options resulting from the combinations of these two considerations is given below. 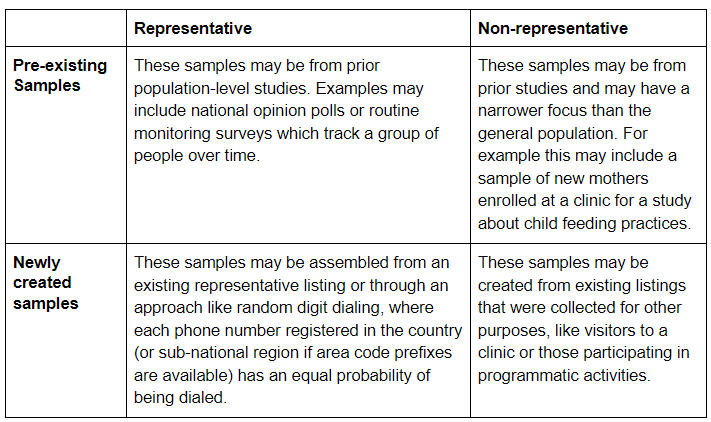 What are the advantages and disadvantages of pre-existing samples?

There are several benefits to using pre-existing samples, such as the following:

Some potential disadvantages to using pre-existing samples include:

What are the advantages of representative samples?

Where possible, you should aim to have a representative sample. Having a representative sample means that those in your sample are not systematically different from the population about which you want to learn and this is key to ensuring that your conclusions are as accurate as possible. Non-representativeness can be introduced in several ways with some significant drawbacks:

A representative sample might also be representative of just a portion of the population, rather than the entire population. For example, understanding the impact of COVID-19 on women, young people, or people with physical impairments may benefit from focusing just on that population. In this case, a pre-existing sample could be reduced to focus on the sub-group of interest, or a newly constructed sample could use screening questions to establish that the respondent is a part of the sub-group of interest.

How should you account and adjust for low response rates in newly created samples or non-representativeness in your sampling frame?

Achieving a representative sample is a challenge for all research work. But, it is especially important to be aware of biases that could be created by trying to construct a sample or collect data remotely and to report and account for these biases in drawing conclusions.

Several approaches are available to adjust for non-response bias and non-representative sampling.

See this World Bank Blog on Mobile Phone Surveys (Part 1): Sampling and Mode for additional details and examples about choosing a sampling frame.